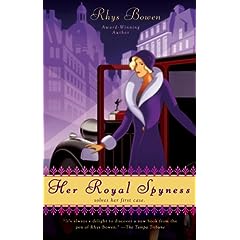 The title: Her Royal Spyness
The author: Rhys Bowen
Publication: Prime Crime, 2007
Got it from: Library

Lady Georgiana ("Georgie"), 34th in line to the British throne, has just had her allowance cut off and now the poor little rich girl has to make her own way in London. Think chick lit set in the 1930's. Okay, to be fair, Georgie isn't as annoying as your average chick lit heroine, and the plot isn't as fluffy. But it's still ridiculously light. There's a murder involved, of course, and a roguish love interest (natch) but I kept waiting for that extra bit of sparkle to come in, something that would make Georgie more than the expected plucky heroine. Sadly, it never came. I'll say two things in favour of the book, though. It did keep me interesteed, and it gave me the fabulous phrase "rumpy-pumpy" which is a euphemism for...well...I'll let you use your imagination. B.
Posted by KJH at 1:55 PM