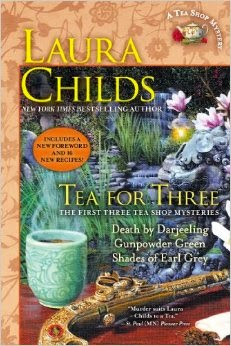 The title: Tea for Three (includes Death by Darjeeling, Gunpowder Green and Shades of Earl Grey)
The author: Laura Childs
Publication: Berkley, 2001, 2002, 2003
Got it from: Indigo Saint John, 2014

One of the things I have discovered about mystery series is that there are mysteries with themes and then there are themes with mysteries.  The Tea Shop books definitely fall into the latter category.  The main character/sleuth in these stories is Theodosia Browning, an outgoing 36-year-old entrepreneur who runs the Indigo Tea Shop in historic Charleston, South Carolina.  Besides being a crack shopkeeper, Theodosia is also deeply involved in the lives of her friends and neighbours, who have a habit of killing each other for some fairly flimsy reasons.  Like many cozy detective stories, the mystery often takes a backseat to the setting.

And what a setting!  Let me first start with the Indigo Tea Shop itself.  It is the kind of tea shop that dreams are made of.  Theodosia's employees include a gentle, grandfatherly tea expert named Drayton and an adorable pastry chef named Haley.  While Theodosia often forgets about work to run around solving mysteries, her two employees run the shop without a hitch.  There is always a kettle on the boil and batches of delicious scones being pulled out of the oven.  Regulars are always dropping in to gossip and rave about the shop and drink tea by the fire.  No one is ever angry, demanding or asking for a refund. Everyone is always neighborly and helpful.  Let's face it, by the time I finished reading, I was ready to move in.

Then there is Charleston itself, a place that before I read these books, I wouldn't want to go anywhere near on account of the heat and humidity.  But Laura Childs paints such a cozy picture of the city, with quaint shops and friendly shopkeepers and historic charm, that I now I want to go.

The mystery aspects of the books are, I'm afraid to say, not that great.  The mysteries are fairly easy to solve and not super exciting.  (In the third book I actually figured out who the perpetrator was in the first chapter, before they were even introduced or the crime was committed).  I feel kind of bad saying this, because I did enjoy the books.  If you're as into tea shops and as steeped (heh) in tea culture as I am, you will probably also love them.  Bonus - you will get to learn about new teas to try and there are recipes for all the food described in the book.  Yum!
Posted by KJH at 2:47 PM 1 comment: 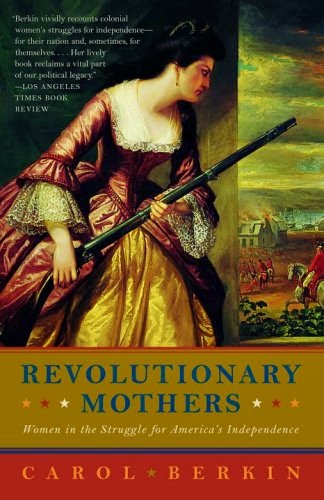 The title: Revolutionary Mothers: Women in the Struggle for America's Independence
The author: Carol Berkin
Publication: Vintage Books, 2005
Got it from: Visitor Center, Quincy, Massachusetts

I've been learning a lot about the American Revolution ever since I became interested in Abigail Adams, and I bought this book when I was on a tour of their home in Massachusetts.  I have to confess it's taken me forever to read, even though it's not a long book at all.  I started it on my holiday last June and finally when the new year rolled around, I told myself to just get it done.

Because this book is slight and doesn't spend too much time on any one woman, it feels like more of a jumping-off point for further research into this fascinating subject.  It covers the everyday life of women on both sides of the war, from the well-to-do ladies of Boston to the camp followers to the plight of women who were slaves.  The author is a professor of American history and this book suffered somewhat from sounding at times like a PhD thesis (x happened because of y, and here are the footnotes to back it up).  I did enjoy some of the fun stories, especially of the Loyalist women who were exiled to my old hometown of Saint John.  A poem of the day summed up the Loyalists' feelings: "Of all the vile countries that ever were known/In the frigid or torrid or temperate zone/From accounts I had there is not such another/It neither belongs to this world nor the other."  Yeah, that's Saint John alright!

Predictably women went back to their confined lives after the war, despite having done some incredible and exciting things during the conflict.  Maybe that's what makes the Revolution so much more fun to read about than the times of peace surrounding it.
Posted by KJH at 10:14 AM No comments: 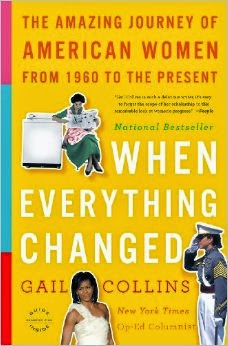 The title: When Everything Changed: The Amazing Journey of American Women from 1960 to the Present
The author: Gail Collins
Publication: Little, Brown and Company, 2009
Got it from: Seneca Falls Women's Rights Museum, 2014

Happy 2015!  What a great book to be starting the new year with.  I bought When Everything Changed last fall on a trip to Seneca Falls and could hardly put it down.

There's so much women of my generation and younger take for granted.  Yet when this story opens in 1960, women weren't much further along than they had been in the nineteenth century. (Once upon a time, I used to think that 1960 was ancient history but - paradoxically - the older I get the closer in time it seems.)  Which is why I think every girl and woman from 8 to 80 should read this book: to learn about a time when women weren't allowed in certain bars, on certain planes and in a lot of workplaces.  There was once a time when women couldn't get their own credit cards without their husband's signature, or buy a house for themselves, or (gasp!) wear pants in public.  And then Women's Liberation happened, and everything changed.  As the author herself says, "Even people who were there don't actually remember what it was like."

What makes this book so engrossing is that Collins is able to seamlessly move from from describing the really big stories about landmark legal victories and big-name feminists like Betty Friedan to stories about ordinary women and their day-to-day lives, in their own words.  There is honestly never a dry or superfluous passage. It all feels important and fascinating.  Nor do white women hog all the limelight.  A sizeable portion of the book is devoted to the Civil Rights movement and how it helped pave the way for the Women's Liberation movement.  The profiles of the courageous African-American women who fought for both movements are some of the best parts of the book.  Out of all the women in the book, Ella Baker is by far my biggest hero.


Most of the book is devoted to what happened between 1964-1973.  As the author later admitted in an interview, everything after that has been an attempt to come to grips with the seismic shift of that short decade.  Some of the ways that things haven't changed are infuriating (as is the section on Phyllis Schlafly, who has arguably done more to destroy feminism than any woman in history).  Still, the story ends on a positive note: the U.S. has recently come close to having a female candidate run for president, and may very well soon have a woman in the White House.  Now that would be amazing.
Posted by KJH at 6:05 PM No comments: