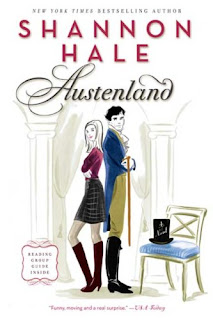 The title: Austenland
The authors: Shannon Hale
Publication: Bloomsbury, 2007
Got it from: Book Depot, 2009

This was going to be a different review.  On Sunday morning, when I was halfway through the book, I made a draft that was going to be another scathing critique of chick lit.  It was going to talk about how I couldn't understand these chick lit heroines, how boring they are, how they expect their Mr. Darcys yet do nothing to earn them.  But then something happened.  I started getting into it.  And now, having finished it, I am astonished to report that I actually enjoyed it.

After the fun of The Secret History of the Pink Carnation, I was longing to read another British chick-lit book that would be light and fun and silly. Jane is a single thirtysomething woman dissatisfied with her love life.  She is given a chance to live out her Jane Austen fantasies when she is willed a holiday to "Austenland" by a dead relative.  People (read: women) go to Austenland to be heroines in Jane Austen's novels, while actors are hired to fill out the male roles.  Jane is expected to live completely Regency-style for three weeks.

My big problem with the book at first was the main character.  Here is a tidbit remaining from my original harsher review:

I despised the main character.  First of all, she is ashamed and embarrassed about her Jane Austen obsession, so much so that she hides her Austen movies in a plant.  But why?  Why would any woman be ashamed of it?  I don't understand.  If grown women can go around proudly admitting they read and enjoyed Twilight and Fifty Shades of Grey, why on earth would they be ashamed of enjoying an author who is considered one of the canon, the literary greats, history's finest?  Admitting you like Austen is like saying: I have brains and class.  Jane, don't you know all the cool women are doing it?

Then, as I said, things changed.  I'm still not sure I "get" some of Jane's actions.  But she did, in the end, prove to actually have a passion outside of her self-obsession, which was painting.  I wish the author had developed that aspect of her personality more, but I'm glad it was there.  I think the turning point for me was when Jane began to realize she may have genuine feelings for the actor hired to play the Mr. Darcy-like character.  She starts to question what is real and make-believe.  I loved the constant game of trying to figure out who is real, and who is false.  There is a great scene in the book when they all put on a play, and Jane and Mr. Nobley (the love interest) talk about whether actors can start to have real feelings outside of their plays, which naturally carries a double meaning inside the story we're reading.

The Secret History of the Pink Carnation 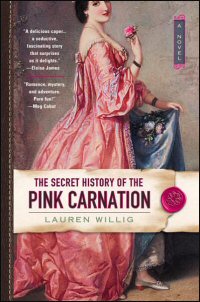 The title: The Secret History of the Pink Carnation
The authors: Lauren Willig
Publication: Penguin, 2005
Got it from: Library booksale, 2008


Happy Victoria Day, everyone! I've spent all weekend in the garden, so no surprises that I have flowers on the brain.  Naturally I also read The Secret History of the Pink Carnation.   It's based on the idea that the Scarlet Pimpernel was real, and that he later spawned a ring of British spies with flowers for their names.  The story follows Amy Balcourt, a young half-French girl who escaped from the terror and grew up wanting to avenge her father's death by joining the League of the Purple Gentian, a sort of spin-off spy of the Pimpernel's.  On her way to France Amy meets Richard Selwick, the Gentian's real-life alter ego who is pretending to be a dull archaeologist working for Napoleon.  Naturally, there is bickering and romance.  Overarching the whole story is the 21st century scholar, Eloise, who's studying the Pink Carnation and butts heads with the Gentian's descendant Colin Selwick.  (Of course there won't be any romance there.  Of course not).


Have I mentioned how much I love the whole superhero-in-disguise thing, where the woman is in love with the superhero but has a feud going with his true self?   Love, love, love it.  Way back when I was child, this was the premise of my favourite show of the time, Lois and Clark: The Adventures of Superman.  Also in Batman Forever, which everybody thinks is a crappy Batman but I disagree because it's all about how Chase Meridian falls for Batman but is all meh about Bruce Wayne (at least at first).  And of course, the origin of the whole trope, the Scarlet Pimpernel, as best embodied in the Anthony Andrews/Jane Seymour movie, which you absolutely must see.  I even love stories of highwaymen that invoke this trope, even though they're technically more bad guys than superheroes.


Which is to say that my love of superheroes/superspies kind of taints my reading of this story to err on the side of giddy joy.  The middle, where the action picks up, is particularly excellent.  Oh, it's silly good fun of course.  (And how jealous am I that the author was only twenty-six when she wrote this?  VERY JEALOUS.)  I figured out who the Pink Carnation was about twenty pages in, and there's not a ton of surprises.  But I just can't get tired of the "damnit I am a superhero and I can't fall in love with this annoying woman but I am so attracted to her" plot.  It's not gonna happen.
Posted by KJH at 3:53 PM No comments: