John Doe on Her Doorstep 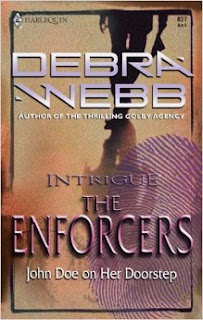 The title: John Doe on Her Doorstep
The author: Debra Webb
Publication: Harlequin Intrigue, 2005
Got it from: Library e-book

A year ago I read the second book in this series, Executive Bodyguard, now I have gone back and am reading the first.  For those who don't remember my previous review, the Enforcers are part of a secret organization known as the Collective, who funnel money from the government to create high-tech military weapons, including the Enforcers themselves.  Enforcers are genetically bred to be superior both physically and intellectually.  One of their prime creators is Dr. Archer, who is something of a father to the Enforcers.  When he is murdered by mysterious enemies, one of the Enforcers, Adam, is sent to eliminate the suspected traitors, which includes his daughter Dr. Dani Archer.

En route to his mission, Adam is ambushed by thugs who mug him, beat him and leave him for dead.  If he was an ordinary human he would be dead, but because he is an Enforcer he survives, albeit without his memory.  He literally stumbles into Dani's house, who's there wrapping up loose ends after her father's death.  Since he doesn't remember who he is, much less that he's supposed to kill her, he lets Dani, a medical doctor, take care of him.  Dani doesn't go to the police as she has a good reason not to trust them.  She's intrigued by Adam, who heals impossibly quickly, and also because he's hella sexxay on account of being a genetic superhunk.  There's some funny scenes as Adam has to be taught how to do everything from eating to showering.  Also look for the trademark patented Debra Webb spooning scene, which appears in every one of her novels I've read so far - not that I mind.

What I liked about this book: The whole idea of the Enforcers is intriguing.  Dani is a strong female character and I thought her relationship with Adam was believable and hot.  The action was fairly fast-paced and exciting.

What I didn't like about this book: It felt too short, but I guess it had to fit into the required category length.  If I hadn't read the second book in the series, I probably would have rushed out to do so, as it helps flesh out the story.  Also, the ending was something of a letdown.  It had the same ending as the other book I reviewed today, and it was too predictable and unoriginal.  I would have preferred a "happy for now" rather than a "happily ever after forever and ever" ending.

Hmm...Debra Webb seems to be becoming my go-to author for romantic suspense.
Posted by KJH at 12:50 PM No comments: 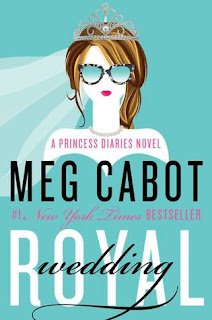 The title: Royal Wedding
The author: Meg Cabot
Publication: HarperCollins, 2015
Got it from: The library

Remember all the way back in 2009 when I was binge-reading the Princess Diaries series and I thought it was all over?  Well, it turns out that Mia's back!

I was as excited as the next fan to spend time with all the characters again.  Neurotic Mia is now 26 and dividing her time between being Princess of Genovia and running a youth centre in NYC.  I don't want to spoil any other revelations, but we get an update on all her high school friends too.  Michael, who still suffers from being styrofoam bland, whisks Mia away for an island vacation where he proposes.  Mia's dad, the Crown Prince of Genovia, is suffering from a midlife crisis and still hasn't gotten over Mia's mom, who was recently widowed.  (Gee, I wonder where this is going?)  Meanwhile, a shocking family secret threatens to shake the family to its core.  Or maybe introduce the main character for Cabot's new kid series.

Don't get me wrong, I still like Cabot's writing.  The pop culture references are fun - who doesn't love a book that mentions Sex Sent Me to the ER?  But I have been reading all the glowing reviews and thinking, what am I missing?  This book would have been a less-than-average addition to the original series.  And the cliched ending was a huge letdown.  I would have liked to see Mia grown more mature, intelligent and forging her own path, rather than the same tired old ending.  I guess when you're writing about princesses, you're not going to be breaking any feminist ground.

The Thrilling Adventures of Lovelace and Babbage 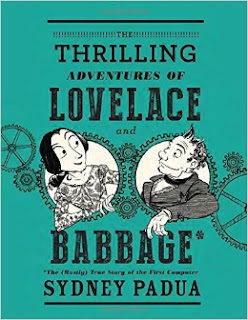 The title: The Thrilling Adventures of Lovelace and Babbage
The author: Sydney Padua
Publication: Pantheon, 2015
Got it from: The library

Ah, Ada Lovelace.  Daughter of Lord Byron, the original Queen of Steampunk, arguably the world's first computer programmer.  Is there anything she can't do?  Sydney Padua doesn't think so, as she sets out to prove in this graphic novel/alternate history/adventure/science and math lesson.  Yes, it's all over the place, as hard to pin down as Charles Babbage's never-finished Analytical Engine.  This graphic novel is really a series of vignettes of "what might have been" if the computer had actually been built and was used to solve crime and various economical woes.  Interspersed are a whole lot of background notes (seriously, at one point I was in the footnote of a footnote of a footnote).  Various Victorian personages drop in and out, including Queen Victoria (apparently the world's first fan of LOLCats), George Eliot and of course the Romantics.

It's all a lot of silliness, of course, but oh my goodness is there a lot of math and science.  I encountered terms I haven't heard since school and didn't know I even remembered.  After reading detail after detail of how the Analytical Engine was designed, I think I may actually have a slight grasp of how computers work.  Don't worry, it's not all dry mathematics, there's actually some pretty great historical humour in here that Victorianists will appreciate.  I particularly love a scene where actual computers (people who did computations) try to wreck the machine Luddite-style and Babbage sits them down to tea to reason with them.  Both Babbage and Lovelace were fascinating characters who make excellent heroes this quirky and fun book.
Posted by KJH at 1:44 PM No comments: 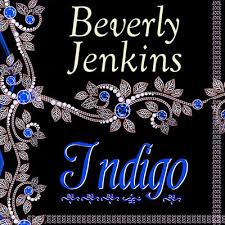 The title: Indigo
The author: Beverly Jenkins
Publication: Avon, 1996
Got it from: Hoopla Audiobooks

But there aren't, so I will have to rejoice in how much I enjoyed Indigo.  It felt like a breath of fresh air.  There was a lot going on in this book that I loved.  First of all, it is set in Michigan in the 1850s, a time and place I know almost nothing about.  The Civil War is looming in the distance, and slavery is still very much a thing.  Hester Wyatt is a former slave who has made a life for herself in the free north.  Since the death of her beloved aunt, she has had to survive on her own.  What I liked about her is how fiercely independent she is, but still shows cracks of vulnerability.  Hester knows her life as a free woman is precarious: slave catchers have been kidnapping freed slaves and sending them back south.  Hester could give in to despair, but she doesn't.  She has worked hard, scrimped and saved, and denied herself every luxury to remain independent in her own house.  Nor has she turned her back on those less fortunate.  Her home is part of the Underground Railroad, and this is how she encounters the hero, Galen Vachon.

Galen is from a wealthy New Orleans family, members of a group known as the free people of color.  Here again I learned about something I was entirely ignorant of.  Galen's family occupies a unique position in their society: they are wealthy and privileged, but because of the color of their skin, they are looked down on by whites.  But because of their distinction, they are not really accepted as being true members of "the race" that Hester and other African-Americans identify with.

Galen reminds me a lot of the Scarlet Pimpernel, because he has used his wealth and privilege to help others escape capture.  He works for the Underground Railroad and has earned the nickname "The Black Daniel" because of his heroic rescues and legendary derring-do.  When the story opens, he has been betrayed and is caught and badly beaten.  Luckily he is found and taken to Hester's safe house for recovery.

Of course in true romantic fashion, he's a surly patient and she's a stubborn nurse.  But they gradually come to respect one another for the lives both have built.  Naturally, there's romantic tension, but Hester immediately senses that she won't be welcome in Galen's aristocratic family.  She knows her hands, dyed indigo from her years spent  picking dye plants, will forever mark her as a former slave.

I love novels that involve politics, and this one has it in abundance.   It was wonderful to see it from the perspective of the African-American community of her time.  Some of Hester's friends, including Hester herself, prefer to take a course of direct action by helping runaway slaves make a new life for themselves in the north.  Other people in Hester's circle are more involved in the intellectual side of the movement, taking part in debates and reading and writing for abolitionist papers.  And some of course do both.  But this novel doesn't always dwell on this serious subject, even though there's some pretty heavy stuff going on (including a slave catcher who's stalking Hester).  There's also some more lighthearted moments, such as carriages breaking down, making mud pies, shopping trips and fairs.  As Hester and Galen's relationship grows, they become more playful and fun together, bringing comfort to each other amidst dark and troubling events.  And the ending?  I was in tears.

It may be a touch old-school (it was written almost 20 years ago), but there's nothing in here for anyone to object to.  It's a fascinating history lesson, a tender love story and an exciting adventure rolled into one.  What's not to love?
Posted by KJH at 11:56 AM No comments: