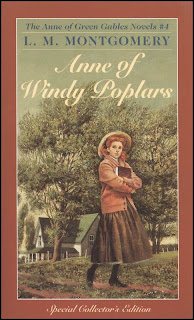 I always consider this to be the "orphan" book of the Anne series because it was written out of order and often doesn't get included in the boxed sets.  Also, outside of North America is was published as Anne of Windy Willows, as apparently nobody would know what a poplar was.

It's hard to believe it's been about twenty years since I last read this book, and I had forgotten most of it.  As always, reading anything by Montgomery is a pleasure.  If you've seen the TV mini-series Anne of Green Gables: the Sequel from the 1980's, you'd probably recognize a lot of the characters and story.  But of course the original book is much, much better.  Instead of Kingsport, Anne is actually teaching in Summerside and she is principal at the high school instead of Katherine Brooke.  Speaking of Katherine with a "K," she's not nearly as horrid in the book as she is in the movie.  The Pringle family are, of course, Anne's chief problem.  But Jen Pringle, who was an absolute bitch in the movie, is more just petty in the book and easily won over.

What the book is, really, is a sketch of Summerside at the end of the 19th century, and the quirks and foibles of the townspeople told mostly through Anne's letters to her fiancee, Gilbert.  Montgomery does a wonderful job of lovingly skewering her society with all the wit of a Canadian Jane Austen.  Over the course of three years Anne manages to tame the Pringles, helps two long-time lovers finally come together, teaches a sulky family patriarch a lesson, baby-sits two terrors "with disastrous results," is inadvertently (un)helpful with two sets of stupid young couples and manages to thoroughly charm her two landladies, Aunt Kate and Aunt Chatty, and the down-to-earth housekeeper Rebecca Dew.  The storyline that runs throughout the book is the sad story of her young neighbour Elizabeth (whom the character of Emmeline Harris is loosely based on), who is left in the strict care of her unfeeling grandmother.  Anne and Elizabeth are instantly kindred spirits and of course Elizabeth gets the Montgomery fairytale ending.

Need I even tell you how much I enjoyed it all?  Reading Anne is like coming home to me.
Posted by KJH at 5:09 PM 3 comments: