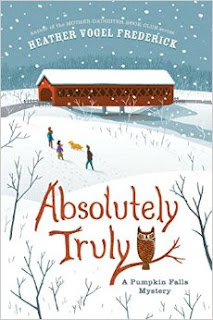 
Exciting news for fans of the Mother-Daughter Book Club series: after writing what was supposed to be the final book in the series back in 2012, author Heather Vogel Frederick has announced another installment due next spring.  In the meantime, I've been listening to the audiobook of her new chapter book for younger readers.

Truly Lovejoy is 13 and her family has just moved to Pumpkin Falls, New Hampshire from Texas after her father sustained an injury fighting overseas.  Truly's family is concerned about the change in their father, who has become more stern and withdrawn.  Taking over the family bookstore might be what he needs to get back on his feet.  Meanwhile, Truly has to deal with the awkwardness of moving to a new town and adolescence in general.

At first I was skeptical.  These weren't my beloved Mother-Daughter Book Club characters, and Truly seemed like a bit of a whiny brat.  But as with the MDBC series, I began to warm to the story and the charming small-town characters.  The book doesn't really start getting good until Truly starts solving the mystery.  As with the girls of the MDBC, Truly leads a busy life that involves dancing lessons, swimming, birding and algebra lessons that she has to squeeze the mystery around.  The mystery involves a series of clues found in a first edition of Charlotte's Web.  (I totally figured out who the letters were for early on.)  As an added bonus, a familiar character from the Mother-Daughter Book Club universe makes a hilarious cameo.

Hooray for Pumpkin Falls and what will hopefully be the first of many in a new mystery series.
Posted by KJH at 2:26 PM No comments: 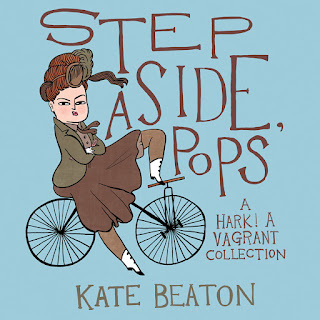 The title: Step Aside, Pops
The author: Kate Beaton
Publication: Drawn & Quarterly, 2015
Got it from: Amazon

I'm late with this review and I'm just realizing I never reviewed Kate Beaton's first comic collection, Hark! a Vagrant back in 2011.  Which is a crime, considering it is one of my go-to books when I am in need of a good laugh.  If you haven't heard of Kate Beaton or Hark! A Vagrant, the website that houses her cartoons, here's what you need to know: she's a Maritimer (like me).  She loves history (like me).  And she draws cartoons that feature the absurdity of a lot of things in history.  They're sometimes Canadian-based, sometimes not, and they often feature badass historical women, but sometimes not.  (The sassy cover model for this collection was taken from a Victorian-era cartoon about the horrors of women cyclists.  In Beaton's interpretation, the woman quips, "You see me rollin up pops you step aside," as she nearly bowls over an outraged gentleman.  He later grumbles, "bloody unbelievable," as another woman cyclist goes strutting by carrying a blaring phonograph.)

There's a goldmine of humour here if you're a general history and literature buff, and the few references I didn't get I ended up researching.  I didn't know a thing, for instance, about Ida B. Wells, but Beaton does a great job at exploring the frustrations of being a black feminist in 19th century America while still being genuinely funny.  She's also at her biting best during her extended "Wuthering Heights" saga and definitely nails all the issues I had with the book back when I was an undergrad.  Even when she's skewering you can tell Beaton genuinely loves the subjects she's writing about.

It's hard to say what my favourite cartoon in this book is.  She's unbelievably funny when she's drawing her own interpretations of classic Nancy Drew and Edward Gorey covers.  (My husband and I are obsessed with one featuring a simple scene of a woman feeding a pigeon bread crumbs.  "Aw yiss," struts Beaton's pigeon excitedly.  "Motha. Fuckin. Bread crumbs."  That's the extent of the joke.)  The prize might go to the multi-arc "Founding Fathers (In a Mall)" and "Founding Fathers (Stuck in an Amusement Park)", which features Washington, Jefferson, Franklin et al inexplicably hitting up modern locations a la Bill and Ted's Excellent Adventure.  If you love Revolutionary history as much as I do, prepare to be seriously amused.  "Here is a chain of carriages that will take us home!" Madison says, pointing to a roller coaster.  "Nay," disagrees another of the Fathers.  "It is merely a circle of violence, and then you retch."  I could read a whole book featuring the Founding Fathers in the 21st century.

At the outset, the cartoons seem silly, filled with sometimes crude humour.  But look beyond and you'll see how expressively the characters are drawn, how brilliant the jokes are, how deftly she skewers familiar tropes.  I know I'll return to this collection again and again.
Posted by KJH at 4:15 PM No comments: