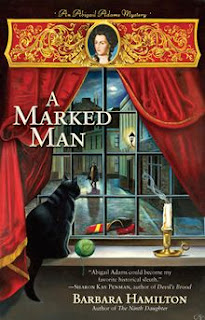 The title: A Marked Man
The author: Barbara Hamilton
Publication: Berkeley, 2010
Got it from: Amazon b-day money 2012 (thanks sis!)

Boston, 1774: Just ten weeks after the Boston Tea Party, the city is holding its breath awaiting retribution from the king.  Amidst days of endless sleet, Abigail Adams is approached by a young friend, Lucy Fluckner: her lover is accused of murdering a royal representative to the colonies.  Abigail knows that the accused, Harry Knox, is involved with her cousin Sam and the other members of  the Sons of Liberty.  There is a danger that if convicted, Harry might be coerced into revealing the names of the other rebels.  While John travels afield to do his duty as a lawyer, Abigail must unravel the clues that point to the real murderer, while facing considerable danger herself.

There's so much I like about this novel and so much I could say.  Barbara Hamilton (a pseudonym for prolific writer Barbara Hambly) does an excellent job in this second Abigail Adams mystery, and her knowledge of the people and customs of the era is mind-boggling.  It is a time and place in history that holds so much fascination for me, because it is so unique: a group of intellectuals who foment rebellion against an oppressive regime and rouse the support of the common people in the process. They're a circle of neighbours and acquaintances who use their knowledge of history and politics to dare to imagine a different, better way of life.  I love all the characters in this world: irascible John, forever turning to the classics for inspiration and guidance; cunning and daring Sam Adams; brave and reliable silversmith Paul Revere; young and idealistic printer Harry Knox; and most of all Abigail herself, resourceful, intelligent and playful all at the same time.

It's Abigail who forms the heart and mind and soul of the stories - she's not just a sleuth in the background, her life with all its trials and routines is at the forefront.  She is first and foremost a women in 18th century America with strong Puritan values, and therefore has strong ties to church, family and home life.  It's hard not to sympathize with her when she feels the exasperating contradiction between knowing she should be doing the household chores and hating them "like the mouth of hell."  And it's easy to see why a woman with her intellect would feel a strong urge to solve a mystery rather than try to separate squabbling children or do endless rounds of thankless washing.  Reading this, one has the sense that proud as she is of her home, she also wants something more than what is allotted to women of her time.

Here, too, we get tantalizing hints that she's unconsciously nursing a crush on her ally throughout the series, the British Lieutenant Coldstone, a man whose principles and intellect match her own.  Naturally she's appalled that people would think there is anything untoward in their relationship and she of course would never dream of betraying her beloved John.  But early on in the story, when she knows she needs to visit the officer again on Castle Island, she has a fleeting "twinge of regret" when she thinks of him.  This is all we get until later on in the story, where she describes him to herself as "extremely comely."  It's one of those clever little teases the author throws in, like name Coldstone: at first we assume it's because he's a stiff-backed and standoffish, but I rather like my own theory, that it's because he's a stone cold fox.

The pleasure here is in the place more than the mystery (alas, I guessed the murderer straight away) and in that Hamilton succeeds wonderfully.  Now if only I could stop worrying that the latest book in the series, #3 (published in 2011) won't be the last.  The author has given hints about Abigail solving crimes with Martha Washington and Thomas Jefferson, and I'll be sorely disappointed if she doesn't.
Posted by KJH at 5:14 PM No comments: