Once Upon a Kiss 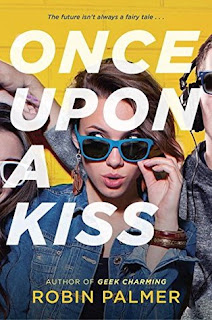 The title: Once Upon a Kiss
The author: Robin Palmer
Publication: Speak, 2016
Got it from: The library

I seem to be on a YA kick lately, after a decade-long absence.  Maybe because they're finally publishing something other than paranormal/dystopian Twilight and Hunger Games knockoffs.   Not anything to do with this review, just making an observation.

I love the 80s.  Love love love love love.  It's the decade I was born in, the first decade I remember and will always be my favourite decade.  I love it all: the artery-clogging fast food and sugary cereal, the music (SO MUCH), the TV and movies, business ladies, the fashion (don't be a hater, it was amazing), and on and on.

I will read/watch almost anything to do with/from the eighties.  So when I found out about Robin Palmer's Once Upon a Kiss, about a 1986 teen transported to 2016, I was all yaaasssss.  Just like 13 Going on 30, but she stays a teenager in 2016.  I didn't realize until partway in that this was written by the same author as Little Miss Red, a book that I had serious problems with.  Still, like a junkie looking for her fix, I devoured this book because EIGHTIES.

Here's what I liked: The eighties references, obviously.  There are a ton of them, especially the music.  I'd be hard-pressed to find a more 80s moment than the main character time-travelling because she chokes on a Fun Dip stick while trying on a Lycra mini dress at the mall.

No, really.  I just checked, and there is no way that scene could get more Eighties.

This is also one of those "best friends discover they are soulmates," book, which I doubt is a spoiler because 1) it's glaringly obvious from page one and 2) it's a standard teen book and movie trope.  It's also one that I like, especially in YA.

But oh boy, did I have problems with this book.

Okay, first of all: the logistics.  Now, I don't expect anything but silliness from time travel.  Whether it's a time-travelling DeLorean, magic fairy dust, a futuristic phone booth - heck, even a hot tub, I expect there to be some means for the protagonist to time travel.  But there's none of that here.  Just choking on a Fun Dip stick and mouth-to-mouth from the most popular jock in school doesn't count.  I want some explanation, damnit!

And while we're at it, can I ask why the heroine, Zoe, actually time-travelled?  Even as I was enjoying the eighties references and the silly fun of her discovering 2016 technology, I just couldn't figure it out.  See, Zoe and her best friend/love interest Jonah are outcasts, made fun of by the popular crowd at school.  But they're cool with that.  They think the popular kids are shallow and they're happy with their outcast status.  All well and good.  So what exactly is the lesson Zoe learns by waking up in 2016 as the most popular girl in school?  It only confirms to her that being popular often makes you shallow, empty and isolated.  But she already knew that.  It also doesn't make her appreciate Jonah any more, although she does miss him in her Queen Bee persona.  She already appreciated him.  So, the question is why?

And why, for that matter, is there a time-travel element anyway?  Was the whole plot just an excuse to imagine an eighties teen discovering iPhones and Facebook?  There's zero attempt at explanation for why Zoe, her family and school are all exactly the same thirty years later, having not aged at all.  Couldn't she just have woken up popular without the time jumping, if that was the point?  And she "got" 2016 technology and pop culture so quickly (read: impossibly quickly) to make the fish-out-of-water element fun for more than half the book.

Also, can I talk about Jonah?  As I said before, I enjoy best friend romances.  It makes a lot of sense for teenagers to find romance this way.  But this kid is so derpy.  It's pretty hard to feel swoony over a guy who is described as having food gunk stuck in his braces and farting when he eats beans.  And his 2016 persona wears a fedora and has a goatee....ugggghhh.  On second thought, let's forget about teen romances ever being actually romantic.  Teen boys are too gross.

Look, I like my YA light and fun, and it was.  I like my protagonists to reject shallowness, and they did.  But actual motivation and character growth would have been nice. 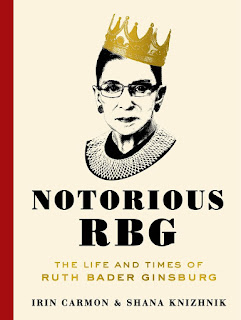 The title: Notorious RBG: The Life and Times of Ruth Bader Ginsburg
The authors: Irin Carmon and Shana Knizhik
Publication: Dey Street Books, 2015
Got it from: The library

I had this book checked out and waiting for me on my coffee table when Antonin Scalia died - perfect timing, I thought, to read the biography of his ideological opposite.  Ruth Bader Ginsburg has become extremely popular in recent years for her spot-on dissents and no-nonsense takedowns of conservative views.  Although she's only recently become a rock star, RBG has been fighting the social justice fight for decades.  As this slight but entertaining biography chronicles, she pushed herself through law school at a time when there were almost no women lawyers, all while raising a family and helping her husband through law school himself.

Although at the time she was not as famous as fellow feminists like Gloria Steinem and Betty Friedan*, RBG chose to fight for women's rights in the courts during the second-wave feminism era.  She brought several discriminatory cases to the Supreme Court and refused to be intimidated by the all-male justices.  Appointed to the SC by Bill Clinton in the 1990s, she has helped judged some of the most important cases in U.S. history, and famously dissented on decisions like Bush v. Gore, Lilly Ledbetter and Hobby Lobby.  Despite some seriously scathing (and awesome) dissents, the book continually points out that she has never come in with guns blazing.  Instead, Ginsburg has worked to chip away at discrimination one law at a time, in cases she knows have a chance of winning.

Her approach may dismay the young social justice warriors (among who I consider myself, partially) but her dismantle-from-the-inside technique is remarkably effective, if exhausting.  I have a ton of admiration for women like her, who've been putting up with BS for years but still manage to maintain their sass and class well into old age.  Oh, and did I mention she had a swoon-worthy romance with her husband for over fifty years, and that her daily workouts put my own to shame?  RBG is an inspiration to women everyone everywhere.