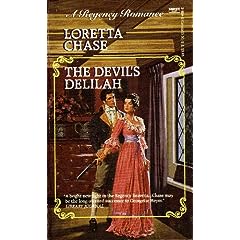 Why, oh why, can't all books be this fun?

The title: The Devil's Deliliah
The author: Loretta Chase
Publication: Walker, 1989
Got it from: Library

Here are five reasons why I love this book, and think it deserves an A:

1. It's even better than I remember from before. This book came highly recommended to me, but I sadly had to rush through it and return it to the library before I moved away. I had to skim-read a lot of it, which is something I never do, and I think that caused me to miss much of it.

2. The complete reversal of your typical Regency romance: he's the shy, skittish, intelligent bookworm and she's the pistol-packing, knife-wielding adventurer with a notorious reputation (ill-founded, but isn't that always the case?) If I could change one thing about Regencies, it would be that there were more innocent, shy heroes and fewer rakes (they're overrated). Oh yes, and more heroines with serious ovaries.

Once she found herself in his arms, she'd decided she might as well let him steal his kiss-only because she was curious-and thereafter reward him with severe bodily harm.

3. He wasn't so nerdy that you wanted to slam his dictionary over his head repeatedly. As Candy from Smart Bitches says, and I quoth:
"I would so pounce on him and make him Aeneas to my Dido, except without the freaky shit involving curses and funeral pyres and stabbing myself in the chest."

As someone who has actually read The Aeneid, and practically all of the classical texts that are mentioned in this book, I can only say: word.

4. Dialogue that was just hysterical. Delilah's, her father's, Jack's...

"Miss Desmond, I find there is-I mean, I have an intensity of...feeling for you that...that I cannot understand-or control, apparently," he ended feebly.
"It is usually called lust, Mr. Langdon," she snapped.

5. No rambly descriptions of scenery or anything else that bores me to tears. Just straight-up witty repartee (my favourite), "delightful romantic misunderstandings," and a cast of outrageously screwball characters.

I really do need to read more Loretta Chase. And Georgette Heyer.

Oh what the heck, one more:
5b: Because it was just what I needed while I was (and am) still feeling very sick. Because sometimes I just want something really funny and sexy that will guarantee me a happy ending, no questions asked. 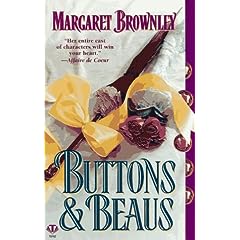 The title: Buttons & Beaus
The author: Margaret Brownley
Publication: Penguin, 1997
Got it from: Freemont Used Books for a whole 25 cents!

I just want to read brain fluff right now. So sue me. I picked up this novel a few weeks ago in the hopes it would enhance my New York City experience, it being set in 1880's NYC. I read most of it on the train back to Buffalo and it actually turned out to be not half bad.*

Alas, my plowing through the novel was curtailed by a long and violent fever, which was not as all as romantic as those swoonings in novels set in yesteryear. They mostly consisted of my hauling my carcass to work for various shifts, followed by sudden collapses on the sofa and wailings to my husband to keep the popcorn chicken coming. A quiet convalescent I am not.

Happily, I finished this novel before last night's earache set in, the likes of which have not been seen since my junior high days. It brought to mind a certain class visit to a generating station in ninth grade, in which my ear hurt so much, I nearly passed out in that room with all the flashing buttons and knobs. (The knobs were mostly my other classmates. But I digress).

Okay, this novel wasn't nearly as bad as I expected, even though it's about bicycling and the cover copy hints that the main characters are "on a bumpy ride to love," they experience an "overwhelming desire neither can put the brakes on," and expresses the hope they will "ride in tandem on the byways of love." How could I resist a book with such groan-worthy puns? And for something that had to entertain me for nine hours on a train, it could have been worse. I actually found myself laughing out loud at a several points. Believe me, a book with both a "special needs" and a crippled child had better be darn funny to compensate. Happily, I really liked the two protagonists and the book wasn't all that stupid.

I'd write more, but my ears are wringing and History Bites is calling, so I must go. B.

*Ed note - Although, remember, I'm the woman who thinks Uncle John Bathroom Readers are compelling stuff.
Posted by KJH at 8:51 AM No comments: 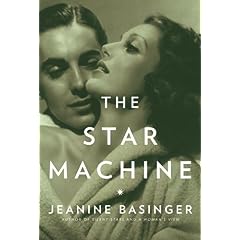 The title: The Star Machine
The author: Jeanine Basinger
Publication: Knopf, 2007
Got it from: The Library

It's been Hollywood time here in our apartment for the past several weeks, and I swear I can't stuff another fact about Tinseltown in my brain even if I tried. Reading this book with the Uncle John one simultaneously was kind of trippy, because at certain points I'd be reading one and think, "didn't I just read this?", only to discover that I had actually read it in the other book.

Right now it's hard for me to give a fair review of this book because I'm sick of hearing about old movie stars, old films and "the star machine." On better days I love learning about Old Hollywood, particularly because stars back then are less annoying than the ones we have now and roles for women were much more interesting. But let's be honest here: you can pretty much guess why I picked up this book in the first place. The answer is on the cover.

What I thought was going to be a light read turned into a very detailed study of the old Hollywood system of "making" stars, a system that is now long dead. It is quite interesting to see how ordinary people were turned into megastars and how the studios provided for their every need, like they lived in little cults and weren't allowed to interact with the outside world. I learned a ton about movie stars whom most people don't know about today but who were worshiped in their day: Deanna Durbin, Eleanor Powell, Van Johnson. What this book doesn't cover are the juicy details in stars' lives, unless they were important enough to affect their careers. Errol Flynn comes across as just a dashing, troubled star instead of the drug-and-orgy loving savage that he was. Power's bisexuality isn't even hinted at.

What brings this book down for me is that it's just too damn long. Yes, the author knows her stuff inside out. I can't even imagine how many thousands of hours of film and countless articles she must have read as research. But for someone with a casual interest like me, it's just too frustrating. The book is 553 pages long with minuscule print and headache-inducing, rambling footnotes. I'm someone who must read every word, and I'm not sure if it was the best investment of my reading time. It's undoubtedly one of the most detailed, comprehensive books on the subject, but only avid film students will find reading it cover-to-cover worthwhile. B.
Posted by KJH at 8:01 PM 2 comments: 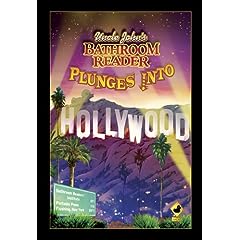 I'm including this on my list because it's a) a book; b) 487 pages and; c) I read them all. And it was darned good. Whether recounting silly trivia, such as the amazing career of Ed Wood or talking about more serious matters (like famous unsolved Hollywood murders), there's never a dull moment. Sneer if you will at such low-brow tastes, Uncle John never lets me down. Not to mention that I learned about all kinds of things I didn't know: the Wilhelm Scream, the first cartoon (Gertie the Dinosaur), and how many actors were ruined by the transition from silent to sound film. As an added bonus, there's no Yankee mistresses! No dumb chick lit heroines! And nobody tells anyone to kill a puppy!
Posted by KJH at 7:51 PM No comments: 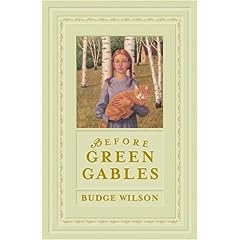 The title: Before Green Gables
The author: Budge Wilson
Publication: Viking, 2008
Got it from: Library

This weekend, I will be reviewing not one, not two, but three books! First up: Before Green Gables.

As those near and dear can attest, my LM Montgomery love goes way, way back to when I was a wee one and we used to visit Prince Edward Island over many a summer, it being not so far from where I lived. After seeing Anne of Green Gables: the musical at the tender age of seven, I was determined to read the whole Anne series. Thus, my first literary obsession (of many) was born. Over my childhood years, I collected all 30+ of Maud's works and read and re-read them religiously. The "big one" of course was Anne, but I also loved her lesser heroines: Pat, Emily, Valency et al. This led me to the dark and fascinating world of Maud's journals, which caused me to suspect that we were possibly the same person separated by 100 or so years. I still swear that her journals are by far the best thing she ever wrote, but since they're not "sunny" and Maud is no "plucky heroine" they're generally not read. I could go on, but that'd be boring.

This leads me to Budge Wilson. She is the "other" great Canadian children's writer in my life. Her short story collection, The Leaving, remains a pivotal point in my reading development and it certainly became an entry for me into more adult works. She's still the only short story writer that I will read - but this is not to say her chapter books aren't great either.

Our paths have crossed five time. The first time I met her, I was nine years old and she was visiting my hometown on an author tour. The last time was two years ago in Halifax. On our fourth meeting, she remembered me and invited me to sit with her and we shared cake in honour of Hans Christian Anderson's 100th birthday. She is absolutely lovely and I adored her immediately. The last time I saw her, she talked about a "secret project" she was working on which she couldn't reveal just yet.

The"secret project" turned out to be the sequel to Anne of Green Gables, which was commissioned for the 100th anniversary of the publication of the original.* I was concerned at first - if the book sucked, would it bring down not one, but two of my favourite authors?

I needn't have worried. Budge Wilson, as I have said, is a great author and she really channels Maud's spirit here. A word of warning, though: this book is heartbreakingly sad. I'm not usually moved by sentimental drivel, but this managed to crack my hardened heart. The death of Anne's parents was almost unbearably hard to read, as were the descriptions of Anne's abuse at the hands of her so-called caretakers. What I really liked was how characters that could have been one-dimensional caricatures were turned into more rounded people. The drunken Mr. Thomas, for example, reveals a softer side and the mother with eight children, Mrs. Hammond, is shown to be really a young woman overwhelmed with her duties, who has no chance to just live.

This book is quite long for a children's book and there's a lot in here to take in, but it's worth it for those who are patient. And since we all know there's going to be a happy ending, we can endure everything Anne suffers. A-

*I am drooling over the re-release of the original hardcover, and I think it's a crime they're not re-releasing all eight in the series. In fact, you can't get the series in hardcover for under $500. This is an absolute outrage.
Posted by KJH at 8:29 AM 2 comments: