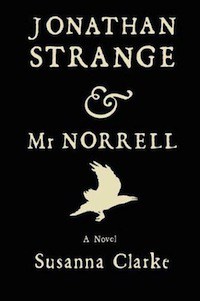 The title: Jonathan Strange & Mr. Norrell
The author: Susanna Clarke
Publication: Bloomsbury, 2004
Got it from: NB, 2007

I had originally read JS&MN almost ten years ago, back in 2007.  But last year the TV mini-series came out, my husband wanted to read it, and I thought it was time to dust off my paperback and re-read.

My impressions are going to be mostly about my experience reading it for a second time, and inevitably it will be compared to the first time.  In order to understand why I loved this book back then, you have to also understand that I was deep into my Regency-loving phase, as well as my magic realism phase.  I also read it swiftly and deeply.  This time the demands of work and other responsibilities meant I read this in a five-month stretch, divided in chunks.

Unfortunately the book didn't hold up as well the second time around.  Maybe I was just feeling impatient, but the whole thing just felt too darn long.  The first time I think I was projecting emotions on the characters that weren't there.  With a few minor exceptions, I didn't connect emotionally with any of the characters.  At all.   Having read the Mrs. Quent series in the last five years, which was probably 2/3 longer than JS&MN's hefty 1000 pages (although divided over three volumes), I feel the former series did it so much better.  Fantasy world building and 19th century manners are fine, but if I can't relate to the characters, forget it.  The Mrs. Quent series had me turning the pages because I cared about the people and felt involved in their lives.  Clarke's writing feels remote and standoffish in comparison.  It's a deliberate choice on the author's part to make it feel more like writing from the era, but it doesn't sit well with my modern sensibilities.  Mrs. Quent had a formal Victorian feel, but the characters felt modern enough to make me feel I was experiencing everything with them.

The other thing that the Mrs. Quent books had was an actual female heroine.  JS&MN didn't, and it bothered me so much more this time around.  It shouldn't be surprising - I mean, the book has two dudes in the title, but I wish the women had been more than just passive, helpless victims.  I know The Ladies of Grace Adieu helps make up for this, but it's a separate book and by the end of JS&MN I was totally sick of reading about dude magicians, dude ministers, dude dandies, dude servants, dude soldiers and dude fairies.

There's no doubt that Clarke did an enormous amount of research in terms of historical detail - events, people and places are all accurate, with the addition of magic.  The book is actually at its best when it diverts from the main plot for witty, amusing footnotes of magical history grounded in England's real past.  (And an anecdote about Napoleon being outwitted by a charlatan and his honking goose is comedy gold.)  But something about it just felt off, like a stuffy piece of furniture that no longer appeals to me.  I realize the book hasn't changed.  I have.  Maybe in another ten years it will be the right time in my life to appreciate it again.  Or maybe it belongs in my past forever.
Posted by KJH at 6:10 PM No comments: 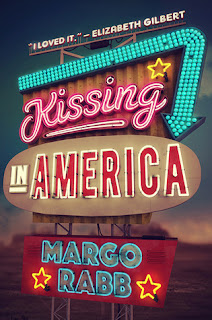 The title: Kissing in America
The author: Margo Rabb
Publication: Harper, 2015
Got it from: The library

It's no big secret that I am drawn to stories about women like me, but rare is the YA book that captures - I mean truly captures - what it felt like to be a teenager.  Particularly a sensitive, romantic one.  And that's just what the heroine of Kissing in America, 16-year-old New Yorker Eva Roth, is.  She's a romantic in a way that no one - not her workaholic mother, or her genius best friend Annie, or any other of her friends and teachers - gets.  Her father, a fellow poetry lover, did get it, but he died in a plane crash two years earlier, leaving Eva detached and isolated under the weight of her grief.  To cope with the pain, Eva turns to romance novels and their promise of happy endings.  Then she meets Will, and in him Eva finds someone who finally understands her feelings.  Will reawakens Eva's love of writing and poetry, and she naturally falls head over heels in love with him.  When he moves to L.A., Eva convinces her friend Annie to compete on the show Smartest Girl in America so she can take a road trip and see him.

I was expecting to read a book about a girl who reads romance novels.  I was not expecting to read a book about the nature and heartache of grief, or that the novel would have no easy answers.  It's easy to see why Eva turns to romance novels to feed that side of herself she's desperately missing, and it's easy to see why Will, who shares so many of her feelings, is so attractive to her.  This novel also gets the incredibly complex and overwhelming experience  of what it's like to be a teenage girl in love for the first time, and why those feelings help you cope with the scariness of growing up.

Even though the story had heavy moments, there were some lighter and funny touches, like Eva's paranoid and germophobe aunt who joins them on their trip.  My only disappointment was that the author seems to have an outdated view of romance novels.  The ones Eva reads seem to be of the cheesy old school type, not the newer, better ones a real teenager nowadays would read.  The book falls just short of making the connection between romance as comfort and romance as mental training ground for real relationships.  Instead it goes for the cheap, easy stereotypes of barbaric alpha heroes and unrealistic stories.

In terms of character, I don't think I've ever read a YA heroine I've loved more than Eva.  She's smart and funny and vulnerable and strong all at once.  It's a refreshing change from so many of the current selfish, whiny YA heroines.  I wanted to reach through the pages of the book and give her a big hug and tell her everything was going to be okay.  And even though there was no big, happy ending, there was a hopeful one.  You knew that in the end, the girl was going to be alright.
Posted by KJH at 12:39 PM No comments: