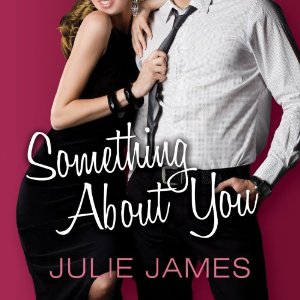 The title: Something About You
The author: Julie James
Publication: Berkley Sensation, 2010
Got it from: Hoopla Audiobooks, 2016

Readers of this blog know I love a romance heroine who has a job with authority, and her protective hero.  Something About You has both those elements.  Well-paced, well-plotted, funny, and super hot: I loved this book.  The first in the author's FBI/US attorney series opens with the heroine, Cameron Lynde, taking time out from her stressful job as an assistant US Attorney by staying at a fancy hotel.  Unfortunately she can't sleep because of the couple gettin' it on next door.  When she calls hotel security, they discover not sexy times, but a dead body.  Bad: Cameron spied the killer through the door's peep hole.  Worse: the FBI are called because it implicates a prominent US senator.  Even worse: the agent who shows up to interrogate Cameron is Jack Pallas, the same agent who worked with Cameron three years earlier on a case that went south.  Because of a big misunderstanding, the case ended up getting thrown out and Jack blames Cameron for the three years he got transferred to Nebraska.

Some of the real highlights of this book are the scenes where Jack and his partner are interrogating Cameron: it's right out of a 1940s screwball comedy.  Cameron's got sass, Jack is straightlaced, and Jack's partner Wilkins is the laid-back good cop.  Naturally Jack and Cameron are totally hot for each other, and it takes a good long time to clear up the big misunderstanding, as they fight their unwanted sexual attraction by trading barbs.  As you might expect, Jack soon becomes extra protective while they try to identify the killer, who the reader knows but the characters don't.  There's some pretty funny moments, often brought about by Jack's partner Wilkins getting involved in his love life (and a certain hilarious mistaken male stripper incident), Cameron's hired cop protectors who also become involved in her love life, and Cameron's gay friend Colin who Jack is jealous of.

I listened to this on audiobook, read by Karen White, who did a great job bringing the the different characters to life (I particularly enjoyed her Agent Wilkins' happy-go-lucky voice) and made the sex scenes sound really sexy.  The danger wasn't super intense, allowing the relationship to take its rightful place at the forefront.  I do enjoy an edge-of-your seat, on-the-run romance, but this was different and it worked for me.
Posted by KJH at 12:54 PM No comments: