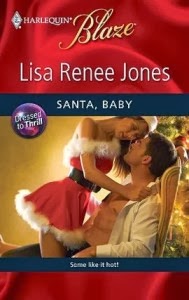 Pity the poor cover model for this book. First, she had to put on a ridiculous Mrs. Claus suit (which, by the way, was not in the book). Then the cover artist clearly whittled away her waist to almost nothing and stretched her neck to twice its normal length. No wonder she looks like she's wincing in pain.

But don't judge this book too much by its cover. Though it started out meh for me, it definitely got better a few chapters in. The story, part of the "Dressed to Thrill" series, is about a woman named Caron (I think it's just pronounced Karen?), a meek and mild bookstore owner who gets the chance to dress up as Audrey Hepburn for a charity event. But plumbing problems keep plaguing her (metaphor! metaphor!) and she shows up too late - in a pink sweatsuit. This was the only part of the book that really bothered me. Who wears a pink sweatsuit, except scary Housewives of Orange County type people? At the event, she bumps into Baxter Remington, the heir to the Remington Coffee fortune, and he falls for her, pink sweatsuit and all. Because she's late, she's given the role of Marilyn Monroe instead.

And we all know where this is going. Feeling confident in her sexy alter ego, Caron and Baxter flirt and finally seduce each other. But wait! He can't get her out of his head. He's embroiled in a legal scandal and she's the only person he can trust. Meanwhile, she's still not sure if he's into the real Caron or her sexy alter ego.

This book got much better once the silliness of the costume business was over with. At first, the characters seemed like generic, stock stereotypes: the mousy woman with the girly job! The ruthless business tycoon! The man-hating FBI agent on their tail! Then, as Baxter and Caron got to talk and know each other better, the story began to feel more real and fleshed out.

I didn't like this one as much as the other Harlequin Blaze I read last year, Slow Hands, but it was a breezy, fun read at a little over 200 pages. As an aside, I have to say I find the Blaze line to be overall superior to its Harlequin kin.
Posted by KJH at 1:22 PM No comments:

It should come as no shock to anybody who reads this blog that I was a voracious reader as a child. I didn't realize how much, actually, until sometime years later when I was busy being a teenager, I walked into the children's section at the library and realized I had basically read everything published before c.1995. (Those of you who were word nerds are nodding your heads right now in a knowing way). I read hundreds, perhaps thousands of books which I can still recall in vivid detail, owing to the fact that books were basically my only form of entertainment as a child. (Okay, we did have three channels of Canadian television. But that hardly qualifies). As one former childhood readaholic once said, there were no bad books, only books I liked and books I loved.

So when I got Lizzie Skurnick's Shelf Discovery for Christmas, it was like spending hours with an old friend who totally comes from the same place. Sure she's about a decade older than me, but most of the books we read were the same, or I'd heard about them from somebody else so it felt like I read them (I admit to never having read Madeleine L'Engle. My sister informed me they're boring, but I withhold judgment). But Skurnick's reading depth and breadth puts even myself to shame, and I humbly bow in awe at all the reading she's done over the years.

What I really like about Skurnick's writing, other than just being fun, is that she seems to put her finger on what made the books stand out for us as children, even if they weren't the most important element of the book. Like the author, I often remembered small details that stuck out for me and I bet for other kids, too. For example, can you identify the following books just from these details I remember? Answers below, if you get the last two I'll be really amazed:

A. Penny in a Christmas stocking
B. Susan with the boing boing curls
C. Dad cuts his hand with a lawn mower
D. Obsession with Casablanca
E. Being carried by Miles

If anything, reading this book reminded me that some of the best stuff out there is written for children. Maybe it's time I dusted off my old collection and take a look at it again with new eyes.

A. Little House on the Prairie by Laura Ingalls Wilder; B. Ramona the Pest by Beverly Cleary C. Are You There God? It's Me, Margaret by Judy Blume; D. Anastasia Krupnik by Lois Lowry; E. Tuck Everlasting by Natalie Babbitt
Posted by KJH at 6:45 PM No comments: The title: The Christmas Charm
The author: Lynn Collum
Publication: Zebra, 2000
Got it from: DC, Xmas 2006

Christmas may be over according to the calendar, but here at Reading Outside the Lines the holidays just keep on going.

Adriana Addington, a recent arrival to England from Italy, is sent to be a companion to her godmother one snowy December. Unbeknownst to her, her godmother has schemes to matchmake Adriana to her bookish, woman-hating grandson. Lord Borland must escort Adriana to his grandmother's house in Scotland, where they meet with several delays and many improbable snowstorms.

Adriana was likable as a heroine, but bordered on too perfect. (She rescues a pregnant woman, an abused servant AND a drowning kitten. Literally. In that order). I usually like the shy, bookish heroes but Lord Borland's misogyny grated on me and I felt he came across as spoiled and selfish.

This book wasn't bad, and did have some cute parts, but it was overall unmemorable. I'd rate it a solid C. Fine for the holidays, but nothing special.