Double review: Further Chronicles of Avonlea and The Story Girl 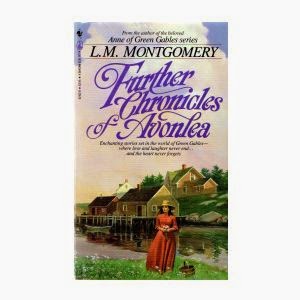 While I was in the middle of reading one L.M. Montgomery book and listening to another on audio, Anne fandom was hit with a huge blow this past weekend with the death of Jonathan Crombie who played Gilbert in the classic Sullivan films.  Two weeks ago at Easter when I reviewed Cool Japan Guide I went down the rabbit hole and started researching the Japanese obsession with Anne, and somehow ended up finding this interview with Crombie. Even though Gilbert of the books will always be my favourite, Gilbert of the movies was everything he should be.  A generation of Anne fans will mourn him deeply.

Anne and Gilbert don't make make too many appearances in this follow-up to Chronicles of Avonlea, although Anne does narrate one of the stories.  What makes these two collections interesting is that they were written to be published as a whole from the beginning, rather than compiled together from various stories like many of the Montgomery collections that began appearing in the 1990s.  The fact that it's set in Avonlea is almost non-essential.  Except for a few mentions of peripheral Anne characters, these stories could be set anywhere in Montgomery's beloved turn-of-the-century P.E.I.  As always, her stories are full of warmth, humour and the follies of human nature, and I enjoyed them with a few serious caveats.

On the whole the first few stories felt stronger than the last handful and overall I thought Chronicles of Avonlea was stronger than its sequel.  Fans of the TV show Road to Avonlea will recognize the story "The Materializing of Cecil," about a spinster who makes up a beau from her past only to have a man with the same name show up in town.  "Her Father's Daughter" was a nice story about a girl who reunites with her estranged father on her wedding day.  "The Brother Who Failed" shows Montgomery's Victorian sentimentality with her It's a Wonderful Life plot: a brother who feels like a failure is proved to be everyone's hero.  "The Son of His Mother" showed Montgomery's near-obsession with sons (she had two herself and was unapologetic in her bias).  This story features a mother so obsessed with her son it borders on mental illness.

Each story is worth discussing, but I want to focus on a couple of things that rubbed me the wrong way as a modern reader.  "The Education of Betty" has a man raising the daughter of a woman who refused him, and he ends up romantically with the daughter in the end.  Yuck.  I find May-December romances incredibly creepy, especially when it's the man who's older.  Even though the girl in this was 19, I just found the whole concept gross, especially as the "lover" was her father figure growing up.

The other aspect of these stories I can't forgive is their casual racism, even though it was perfectly acceptable at the time.  As much as I love Montgomery, holy crap was she racist.  She basically looks down on anyone who isn't a white well-to-do Protestant, but it's even more pronounced here.  There's a throwaway line at the end of "The Materializing of Cecil" disparaging the Chinese, but you could write a thesis on last story, "Tannis of the Flats," and its depictions of First Nations people.  I'm not going to repeat the slurs here but suffice it to say the whole story is based on racist stereotypes and ethnic insults abound.  Modern readers will be horrified. 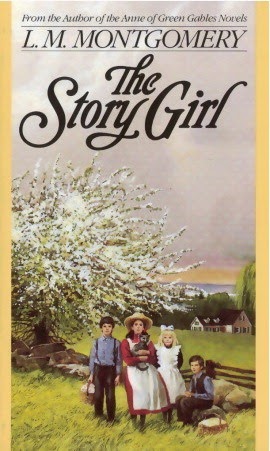 The title: The Story Girl
The author: L.M. Montgomery
Publication: L.C. Page & Company, 1911
Got it from: Hoopla Audiobooks, read by Grace Conlin, 2006

Less racist (although still classist) was my audiobook listen of The Story Girl, which along with its sequel and the Chronicles of Avonlea formed the basis of Road to Avonlea.  This is the only one of Montgomery's books that I didn't remember a thing about from having read as a child, except for the scene where the children pay someone for a picture of God. Montgomery has said it was an autobiographical story.  It features a summer in the life of a group of clannish cousins, along with their mischievous hired boy Peter and a wet blanket of a friend named Sara Ray.  It's narrated by one of the boy cousins, but the true protagonist of the story is Sara Stanley, the narrator's cousin.  Although she's not as beautiful as their conceited cousin Felicity, Sara is more beloved for her imagination and her ability to tell marvelous stories.  Her tales form many stories-within-stories that often reflect events in the children's lives.  Grace Conlin reads beautifully and the oral storytelling in the book makes for a perfect audiobook experience.  I expect to follow up with the sequel The Golden Road in the near future. 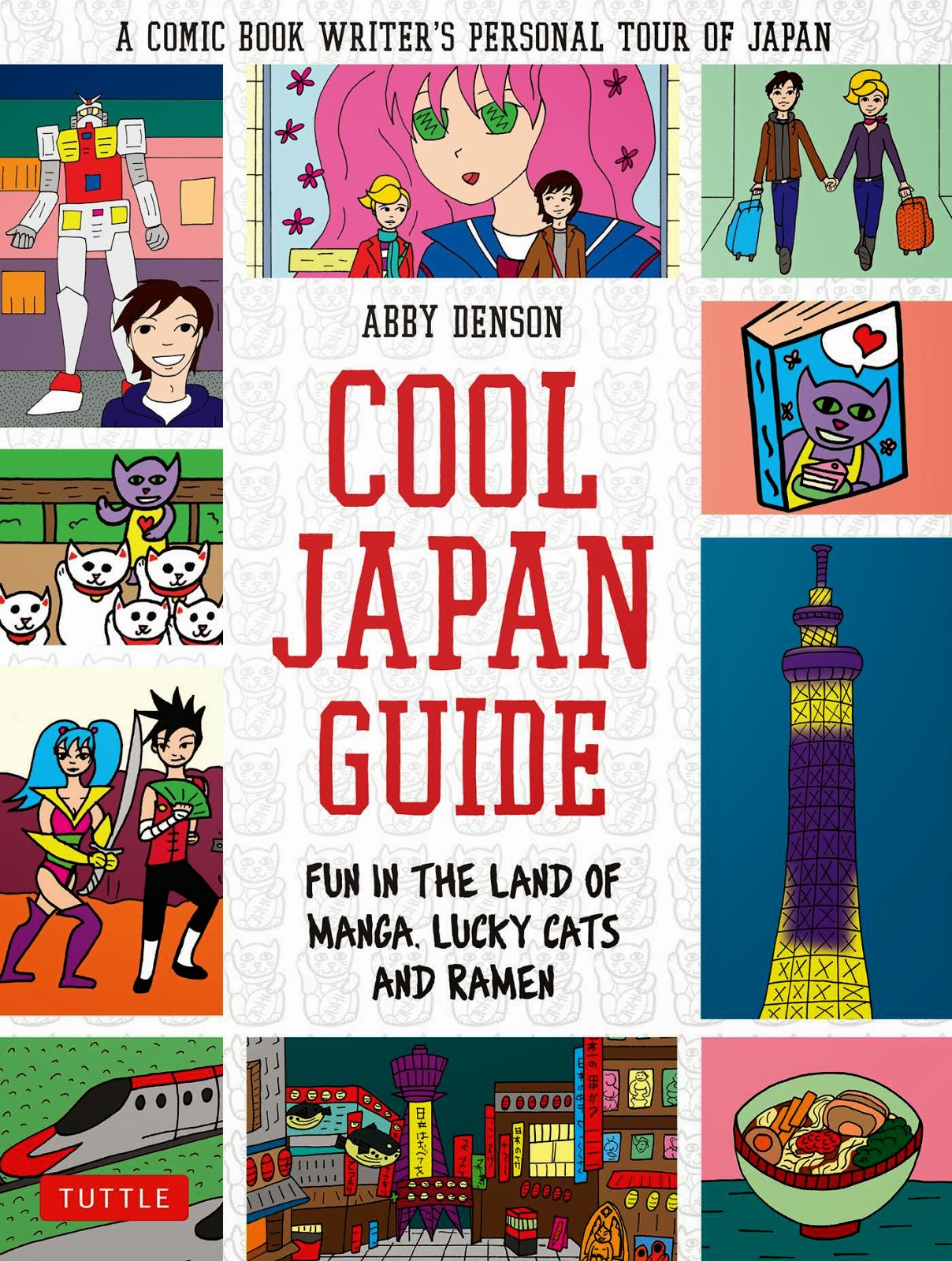 The title:  Cool Japan Guide: Fun in the Land of Manga, Lucky Cats and Ramen
The author: Abby Denson
Publication: Tuttle, 2014
Got it from: The library

Abby Denson is a graphic novel writer and huge manga fan who has spent over a decade travelling back and forth to Japan.  In Cool Japan Guide,  she presents a super fun and cute comic guide to the country based on her own experiences.  This is definitely not the kind of book I normally read.  I  tend not to like comics.  But I loved this one.  For one thing, given how bright and colourful a country Japan is, it actually lends itself well to the comic format.  Abby herself is like the experienced friend you would love to have guide you through confusing cultural differences and take you straight to Japan's best spots.

Reading this reminded me of all the things I love about Japanese culture.  The politeness and introversion.  The cleanliness and efficiency.  The tranquil gardens and exciting cities.  The elaborate tea ceremonies (I got to see a traditional Japanese tea ceremony at a tea festival this year, and it was fascinating).  And the food - oh my god, the food.  There is a whole chapter devoted to Japanese cuisine worth the price of the book alone.  I am already obsessed with sushi and ramen and bento boxes and tempura, but I learned about so many more delicious things.  Do not read this book hungry. I almost drooled on the pages.

Even if you don't know much about Japan I would recommend this book.  I was definitely ready to pack my bags and go by the end of it.  Here's hoping that the comic book travel guide becomes a big thing soon.
Posted by KJH at 1:28 PM No comments:

The Map of the Sky 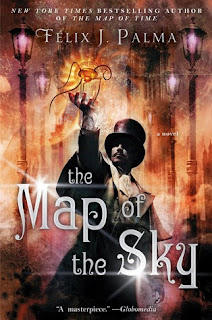 The title:  The Map of the Sky
The author: Felix J. Palma
Publication: Atria Books, 2012
Got it from: The library

Well, here it is: my first review in a long time that is going to be less than glowing.  Most of the time, I won't even bother picking up a book if I don't think I'm going to enjoy it. (Book club books excepted: I just had the dubious pleasure of slogging through another tedious Alice Munro book.  Blech.)  To be fair, I loved the first book in this trilogy, The Map of Time, but when I read the excerpt for this book in the back of that one, I went, "Nope.  Not for me."

I thought that was the end of it, until a friend who also loved The Map of Time assured me that I absolutely had to read Sky, that I would love it.  Confession: I almost never take reading recommendations from other people, because 95% of the time I end up hating the book and resenting the time I wasted reading it.  However, I figured someone who loved a niche book like Time as much as I did could be on to something.

I wish I hadn't bothered.

The Map of Time was based on H.G. Wells's The Time Machine and in Sky, it's based on The War of the Worlds.  As in Time, Sky is structured into three different acts.  The first one is a straight-up horror novel.  It concerns an early 19th century exploration ship that gets trapped in the Antarctic ice.  An alien ship crashes into the ice nearby and begins brutally murdering the crew members in extremely gruesome ways and taking over their bodies.  The second act concerns a character from the first novel, a crafty entrepreneur who falls in love.  To prove his love, he has to recreate the Martian invasion of The War of the Worlds, but things go awry when real aliens invade London.  Again, there is devastation and carnage.  In the third act, we see the mind-numbingly horrific dystopian future of mankind as they are reduced to slaves for the aliens and doomed to extinction.  There is a way for H.G. Wells to save the day, but the ending is so bleak and lonely, it's hardly the emotional uplift necessary to pull us out of this depressing mess.

I'm so sad that I read this.  I like Palma's voice as an author and his quasi-Victorian tone.  However, there was just too much wrong with this book for me.  First of all, it was too damn long.  At close to 600 pages, it could have easily been cut in half and the narrative would have held.  Second, I just really, really dislike horror and dystopias.  But all of this could have been saved had I liked the main characters and cared about them.  But I didn't.  Wells himself comes across as a self-centred, fussy little man incapable of love.  The two lovers from the second act were both annoying.  I liked Montgomery Gilmore in his alter ego from the first novel, but as a besotted lover he wasn't believable.  His love interest, Emma Harlow, was so selfish, spoiled and cruel that one wonders how her supposed beauty could make up for what a bitch she was.  Yet their so-called love is played straight, as if we are supposed to believe their messed-up "romance" is the greatest love story of all time.

There were just two parts of the novel I liked.  The first is a brief section involving one of the aliens who has been living as a priest amongst humans his whole life.  When the Envoy arrives signalling the beginning of the invasion, he and the priest sit down to tea to discuss the future.  The priest has already assimilated into human culture.  He has become a gentle soul, caring for the plants, animals and people at his church.  As he tries to hide his sorrow at the impending massacre of the world, I couldn't help but think of the irony that he was the most human character in the novel.  I wish he had played a bigger role.

The other redeeming part of the story involves the lovers from The Map of Time, reduced here to peripheral characters.  Claire and Captain Shackleton's love story in the first book is what I adore most about the whole series so far.  In Sky we see them as a happy married couple, and subsequent events in the novel show their deep and abiding love for each other in a way that actually retroactively strengthens their initial story.  I kept wishing that the main lovers would just hurry up and die so we could get back to Claire and Shackleton.

Actually, everything about Sky compares poorly to Time in my mind, not just the love story.  The intricacies and brain exercises of time travel are just so much more interesting and compelling and subtle than the senseless slaughter of horror.  And the twists and revelations in Time were a genuinely delightful surprise.  There was nothing delightful or surprising in Sky.

I hope, hope, hope that the next one in the series, due in June and based on The Invisible Man, brings a return to everything I loved about the first novel.  I could do with some compensation for a month spent on books I didn't enjoy.