Heaven to Betsy and Betsy in Spite of Herself 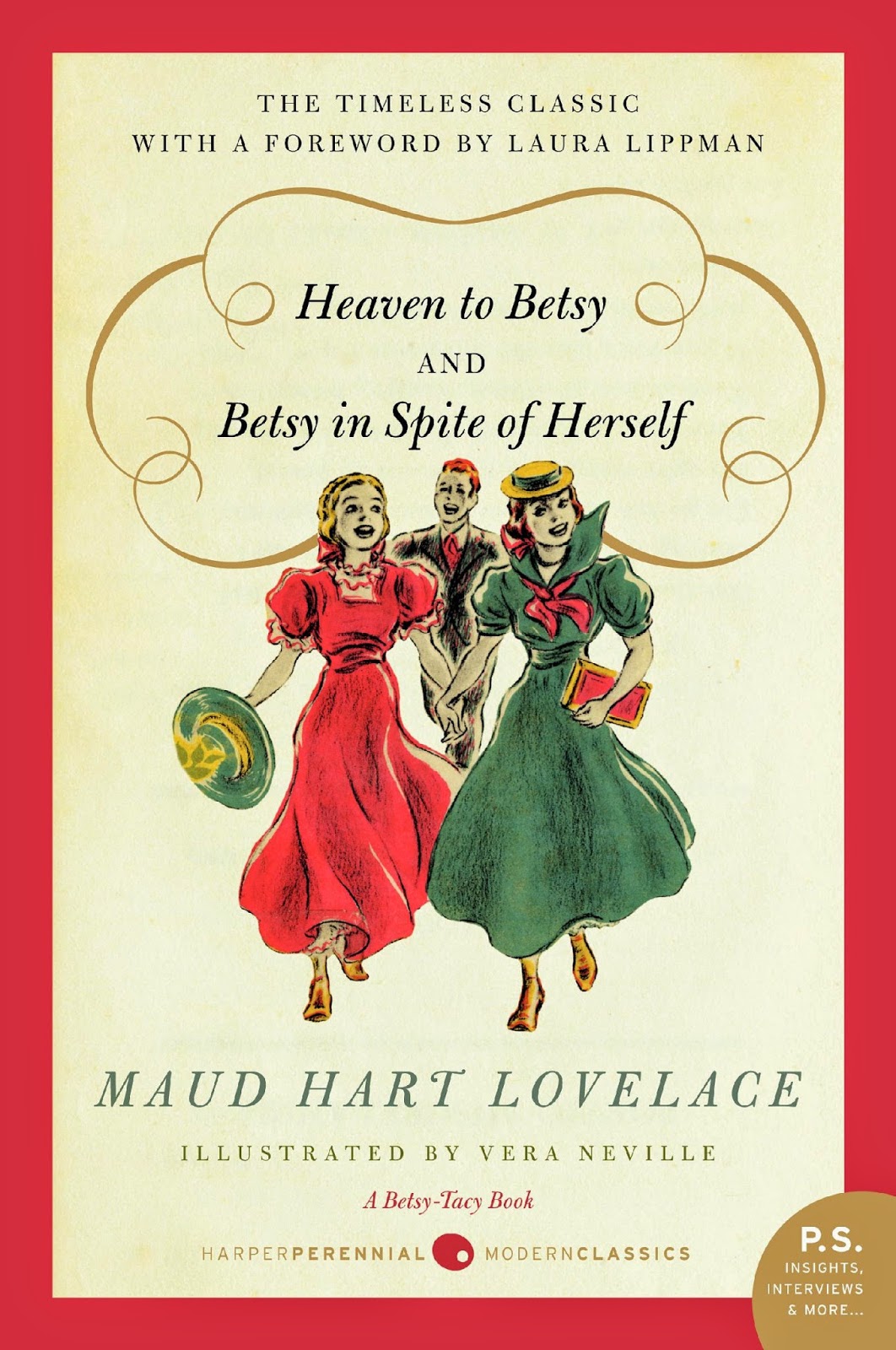 The title: Heaven to Betsy and Betsy in Spite of Herself
The author: Maud Hart Lovelace
Publication: Harperperennial, 2009 (originally 1940s)
Got it from: Amazon, 2013

I am returning to Betsy's world for the first time since last winter.  In the two books of this compilation, we return to the world of Deep Valley, Minnesota during Betsy's freshman and sophomore years (1906-1908).   As much as I enjoyed reading about Betsy's childhood adventures, I have to say I loved Betsy's high school adventures more.  Many of them were taken directly out of Maud Hart Lovelace's own teenage years.

Reading these stories almost breaks my head as I try to grapple with the contradiction of having everything feel so old but so familiar. On the one hand, Maud was born ninety years before me.  Think of "old timey" and these books are it.  We're talking pompadours, "socials," ice cream parlours and Nickelodeons.  It's a world that seems remote, but yet close enough that I could almost reach out and touch it.  My grandmother's descriptions of her growing up years remind me very much of Betsy's.  Betsy herself even feels that strange sense of touching history when she hears a friend's grandmother talk about pioneer days and Indian raids fifty years earlier.  In Betsy's world, there is no television or radio and no electricity.  In Heaven to Betsy, the Ray family gets indoor plumbing for the first time.  Only a few cars exist on the scene and their presence is noted as being remarkable.  Kids roam the streets freely and pop in and out of each others' houses daily.  When they get together, they make taffy and sing around the piano.  Make no mistake: this is the past.

And yet - and here's the contradiction - reading this book I thought, this is the story of my high school life.  I honestly felt like I was watching my high school years in the 1990's play out all over again.  What is it about the teenage years that feels so universal, no matter what century you're in?  Suddenly friends burst out onto the scene like never before, shaping your outlook and experiences.  Betsy suddenly finds herself hanging out with a "crowd" that encompasses new and old friends, much as I did.  Like every (straight) fifteen-year-old girl in the history of ever, including me, Betsy becomes obsessed with boys.  (A footnote at the back of the book states that Lovelace destroyed he high school diaries in later life because they were too full of boys.  A shame!)  Basically everything Betsy experiences reads like a checklist from my high school years: Suddenly becoming obsessed with how pretty you are?  Check!  Trying and failing to reinvent yourself?  Check!  Dating the "wrong" boy just because he's exciting?  Check!  Being extremely silly and passing notes in class?  Check!  Having your first dance be the most exciting thing ever?  Check!  Letting your schoolwork slide because you're having too much fun?  Check!  Experiencing that bittersweet agony of a first breakup?  Check!

And this may in fact be the key to why the Betsy-Tacy books have endured all these years, and why so many other coming-of-age stories from those years have faded into obscurity.  Betsy is so much more relateable than, say, Elsie Dinsmore*.  Yes, she sometimes does silly things like trying to change her personality for a boy, but you can't help rooting for her because we were all there at one time, we all know it's going to work out in the end and mistakes are an important part of growing up.  Another "draw" for me is that despite the many, many problems of living in the early 20th century, I can't help feeling a pang of nostalgia for the days of school dances, picnic socials, musical evenings and recitals.

Or maybe it's the rose-coloured view of high school that I'm really remembering.


*Because I spent most of my childhood living in the late Victorian era, I knew who Elsie Dinsmore was before I read this book.  She's a goody-goody that all Victorian parents want their daughters to be.  Every self-respecting Victorian heroine hates her.  Betsy even makes fun of her when she's trying to decide if it's wrong to go to a play on a Sunday.  "Elsie Dinsmore, she remembered, had refused to play the piano on Sunday; she had fallen off the piano stool instead.  But Betsy had never thought much of Elsie Dinsmore."
Posted by KJH at 6:38 PM 1 comment: