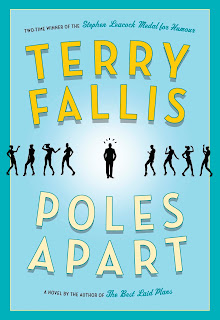 The title: Poles Apart
The author: Terry Fallis
Publication: McClelland & Stewart, 2015
Got it from: The library

I really enjoyed Terry Fallis's political books, The Best Laid Plans and The High Road, which poked gentle fun at Canadian politics with a healthy dose of liberal idealism thrown in (that's big "L" and little"l" liberal.)  Surely Angus McLintock, the grizzled feminist engineering professor/MP at the heart of these novels, would approve of our new PM.  Wait, did I say feminist engineering professor?  You mean an actual male writer has a feminist character in a mainstream novel?  That's just one of the many delightful touches in Fallis's stories that elevate them to must-reads, at least in this feminist's eyes.

So imagine how excited I was that a male feminist was going to be the main character of Fallis's new book, Poles Apart.  The title is a double entendre, as the hero lives (by accident) above a strip club.  Everett Kane is a freelance writer who's drifting in life.  The only time he ever felt enthusiastic about something was in his university days, when he worked as a crusader for women's equality.  His dad is an old-school misogynist, his mom a high-powered businesswoman (they're divorced).  Everett moves to Florida after his father suffers a stroke.  At the rehab centre he meets Beverley Tanner, a feminist from the heyday of second-wave feminism and an idol of Everett's.  Beverley inspires him to write passionately about feminism, which he does on his new blog, Eve of Equality (which uses both the phrase "on the eve of equality" and Everett's name).

In true Fallis fashion, the blog goes viral and everyone is trying to figure out the author's identity.  Everett is desperate to keep it secret, as he wants the message and not himself to be the focus of attention.  Matters get worse when the owner of a nation-wide strip club he lambastes on his blog ends up moving his strip club below Everett's apartment.

Strip clubs?  Ugggh.  I hate that tired trope, but at least here's it's used ironically (a feminist living above a strip club?  Say what?).  Naturally, Everett befriends the hooker with a heart of gold one of the strippers, but thankfully that doesn't go the way I expected it to.  Along on the friend train is a gentle giant of a bouncer and the strip club owner's young and attractive lawyer.

Naturally everything gets wrapped up in a neat package at the end but I like that don't tell anyone.  I could have done with a lot less of the macho dad, although he does undergo a conversion of sorts.  I would have loved to actually read Eve of Equality's blog posts but the book doesn't even give us so much as a paragraph.  But all that pales in my excitement about a mainstream, funny book about feminism.  Like the hero, I also think that humour and feminism go hand in hand, and that men can and should get involved.  Now if only Fallis would write a book from the actual perspective of the badass older women in his novels, that would be amazing.
Posted by KJH at 10:57 AM No comments: