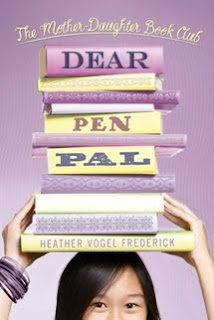 The title: Dear Pen Pal
The author: Heather Vogel Frederick
Publication: Simon and Shuster, 2009
Got it from: Kobo Books

The gals are back reading Jean Webster's Daddy Long-Legs in this third book in the Mother-Daughter Book Club series. The story kicks off with Jess being accepted to an exclusive Concord boarding school, which of course parallels the story they're reading. They also begin writing to pen pals in Wyoming, each of course having similar character traits to their Concord counterparts (Summer loves quilting, Megan's into fashion; Winky is an outdoors ranch girl, Cassidy loves being a tomboy into sports, etc.) Having now accepted their arch-nemesis Becca into the group during the last installment, their new enemy is Savannah Sinclair, a snobby senator's daughter who is rooming with Jess at boarding school. Things are also getting interesting in the romance department, as Emma and Stuart's relationship grows, Jess is almost ready to admit her feelings for Emma's older brother, and even Cassidy has an unwanted admirer.

Daddy Long-Legs is the only one of the four book club books I haven't read (a fourth novel, where they read Pride and Prejudice, is due to be published later this year). I didn't find this book to be as fun as the first two. The timeline also seems to jump in great leaps and bounds: someone mentions a class trip to Washington and presto! - a few pages later they're there. I really wish I had been in this book club when I was younger, as everything always seems to work out so magically for everyone and spontaneous field trips to faraway places frequently crop up (ten bucks says they go to England in the next book). Also, I had a difficult time keeping the huge cast of characters straight toward the end. Overall, though, I did enjoy this book and it kept me turning pages late at night. I am looking forward to the next and last installment, as I suspect it will be romance-heavy as their book of choice indicates. And I can't wait for Jess and Darcy Hawthorne to get together. I mean, come on. With a name like Darcy, how could he not end up being the real romantic hero of the series?
Posted by KJH at 7:32 AM No comments:

Updates coming soon, I PROMISE! Things have just been too crazy 'round here to read any books worth blogging about. But I will definitely get back to it as soon as humanly possible.
Posted by KJH at 7:29 PM No comments: