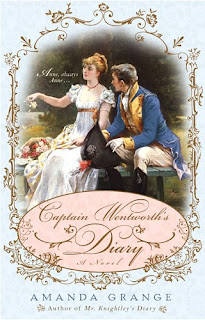 The title: Captain Wentworth's Diary
The authors: Amanda Grange
Publication: Penguin, 2007
Got it from: MC

I feel like I've been reading a lot of Jane Austen-inspired stuff this year, and I don't know why that is.  I didn't plan it, but somehow friends have been loaning me a lot of JA books - not that I particularly mind!

Amanda Grange has written "diaries" for all the heroes of Austen's novels and in this one we get to see the diary of Captain Wentworth, the hero of Persuasion.   And I actually liked it.  I think it works, largely because half of the story is how Wentworth initially meets and proposes to Anne Elliot, which we don't get to see in the original story.  In Persuasion, Wentworth's motivations are a bit mysterious and we don't like him very much at the beginning because we're on Anne's side, but here it's the other way around.  Grange paints him as a rather charming and good-natured man, and we see how easy it is for him to fall in love with intelligent Anne.  We also see why after being at war, he is charmed by the lighthearted, young Miss Musgroves, and why Anne's depth ultimately wins his affections again.  Reading Austen herself is always best, but I liked that this story felt lighter from his perspective - after all, he does have a much easier time of it than Anne after their initial meeting.  In general, I enjoyed that we get to see his perspective, because it's always more fun to know both sides of the story.  Recommended for "a light Regency diversion," take with tea and ginger snaps for full effect.